Dubrovnik for one day - and ten centuries

Dubrovnik for one day - and ten centuries

Although Dubrovnik is a city widely known for its beauty and rich cultural and historical heritage, most visitors spend only one day there. Nevertheless, even a day spent in this idyllic, walled Mediterranean town is enough to be remembered long after departure.

It takes about 90 minutes to visit the oldest part of the city, if you are accompanied by a travel guide or use guide books to learn about old legends and stories about the most attractive and interesting sights of the city. There you can visit the fortress of St. Ivan, in whose premises a significant part of the treasures from the Republic of Dubrovnik are kept, and it also houses the Maritime Museum, the Aquarium and the Institute for the Sea and the Coast. On the same route, you come across the Franciscan monastery, known in the world for the pharmacy that has the longest uninterrupted life: it has been dispensing medicines since 1317. The monastery is also known for its library with some particularly valuable titles. The stone walls surronding the town are the trademark of Dubrovnik. They offer a wonderful view of the old town center. The construction of the walls began in the 8th century, they are 1,940 meters long, up to 25 meters high, and up to six meters wide. In the 14th century, 15 quadrangular towers were built, of which Minceta dominates.

Ever since the Lovrijenac fortress was filmed for the Game of Thrones series, tourists regularly have it in their plans for a one-day trip to Dubrovnik. Before it appeared in the famous television series, the Lovrijenac fortress was known as the Gibraltar of Dubrovnik, because it dominates the seascape from the 50-meter-high rock on which it was built.

The medieval city of Dubrovnik is rich in heritage that dates back to the time of its construction. It is worth visiting the Knežev dvor (The Duke's Palace), the most important public administration building where the first man of the Republic of Dubrovnik reigned. The Atrium of the Duke's Palace is the most acoustic building in Dubrovnik, where concerts of the world's best musicians are held today.

The acoustics of this building were not always a characteristic that evoked a pleasant emotion. Namely, the Duke's Palace also served as a prison, known for its brutal treatment of detainees. Wails and moans were clearly heard from the cramped, dark, damp and dirty cells, which some of them had not left for 25 years, without the right to see the light of day. 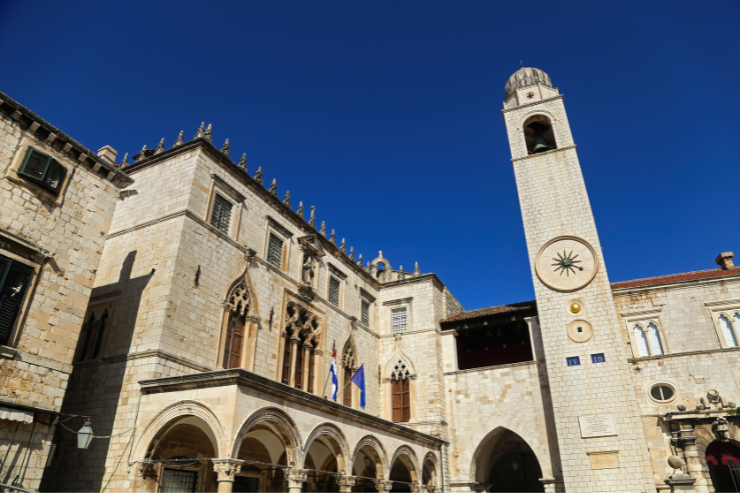 The dynamics of daily events were certainly more hectic in the Sponza Palace, which served as a customs office, bank and cultural center. Today, theater plays are performed in these rooms as part of the Dubrovnik Summer Games Festival, while during the year the building is intended for the State Archives with a rich collection of written words from the Republic of Dubrovnik. The Sponza Palace also serves as a wedding hall, which you can visit if you want to remember your one-day trip to Dubrovnik for the rest of your life.

Due to the particularly important potential of its defensive position, the Dominican monastery was built by both men and women who inhabited Dubrovnik at the beginning of the 14th century. It is one of the largest Gothic buildings on the eastern coast of the Adriatic, which houses the library with the oldest catalog of books in the world, "Cupientes emere libros", published by Anton Koberberg from Nuremberg in 1480. Dubrovnik never fought a battle with hunger, because it had 15 silos, that is 15 holes nine meters deep, with a volume of 1,500 tons in which grain was stored. The city was unique as it was the only one in Europe that stored food underground. Today Rupe is a museum, with an exhibition dedicated to the importance of the granary on the ground floor while on the second and third floors there are exhibitions of Dubrovnik ethnography, old costumes, lace and other handicrafts.

The most famous street in Dubrovnik is Stradun, although its formal and less known name is Placa. Stradun is a word of Italian origin, and gives a derogatory meaning to the street, indicating that it is neglected, ugly. Allegedly, this term was used by an Italian during a visit to Dubrovnik, reflecting the bad condition of the city's main street at the time, which was dirty, with animals crossing it and the surrounding shops leaking various materials. Today's Dubrovnik in no way depicts the derogatory meaning of the word and Stradun is a name that is widely associated with this town precisely as a symbol of its unique beauty. Dubrovnik also has beautiful beaches: Banja, Porporele, Buže, Šulića or Danača, but also suburban settlements, such as the Arboretum in Trsteno.

As an agency whose activity is the online sale of bus tickets, we offer you direct departures to Dubrovnik from the following cities:

The bus station in Dubrovnik is located at Obala Ivana Pavla II 45, 20000, Dubrovnik.