Did you know that the public transport, especially by bus, greatly contributes to environmental protection? One would think (even me until recently) – It's not possible, look at the size of the bus, and all the smoke when it goes uphill, and so on. However, we would all be fooled with that lump grades and personal impression.

Analyses indicate that the bus transport consumes the least fuel per transported passenger per 100 kilometers compared to other forms of transportation such as by private car, plane, or boat. Of course, neither bus can be compared to a bicycle, which is certainly the "greenest" transport vehicle, whether by bike, you can not exceed the same number of kilometers as by bus at a certain time interval.

Well, let's find out some facts on the emission of harmful gases during our trip by private car or, for example - by bus.

Suppose you want to go on a 1000 km long journey. Here's the deal with different means of transportation.

On average, a family car with a diesel engine produces 122,092 g CO2 per passenger per kilometer. This fact refers to an average of 1.6 passengers. So, for our way of 1000km will be broadcast 122,092 kg CO2. If I travel alone, I take responsibility for all the produced carbon dioxide and in this case it's 195.347 kg CO2. If I'm traveling with another two passengers, we find that we have produced 65,1157kg CO2 per passenger.

Let's apply this logic on the bus transportation. Bus with Euro IV standards in the non-urban transport with 25% coverage airs 18.6857 g CO2 per passenger per kilometer. So, for our journey of 1000 km will be broadcast 18.68 kg of CO2 per passenger. We are already seeing significant savings when it comes to greenhouse gas emissions in transport.

In the table below is a comparative data analysis of public bus transport, and transport by car with 25% coverage and with 100% occupancy seats. 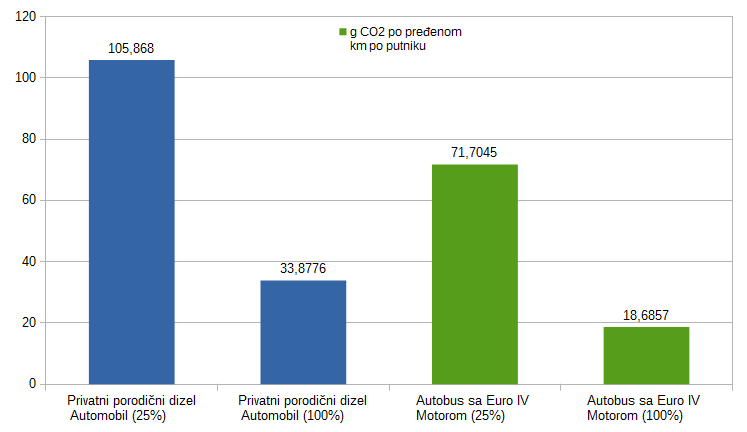 Now that you know the facts, think again about the means of transport before you decide to hit the road though, because we have only one planet available. Let us be responsible for planet Earth.

Look at the exact timetables for bus transport in interurban and international traffic within the Serbia, Montenegro, Croatia, Bosnia and Hercegocvini, Austria, Germany, Slovenia ... www.busticket4.me

Source of data for analysis taken from www.theguardian.com